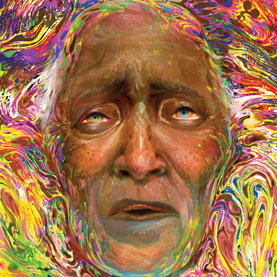 The incidence of Alzheimer’s doubles every five years after the age of 65 until, by 85 years, nearly one in three adults is afflicted.

Are you wondering what percent are afflicted at age 65?  Can you work backards from 33% being affected at age 85?

Let’s build up the equation.  When something doubles, you multiply by 2.  When it doubles a bunch of times, you will be multiplying by a bunch of 2′s… or simply

Since it is doubling every five years, you only want to multiply by 2 when the year hits a multiple of 5.  So, change it to

You also need some sort of initial amount that is getting doubled in the first place.  Our initial equation to represent the percent of people with Alzheimer’s at  65 is

Well, let’s answer the question.  What percentage of people have Alzheimer’s at age 65 (n=0)?

Seeds of Dementia: What Do Alzheimer’s, Parkinson’s and Lou Gehrig’s Have in Common?