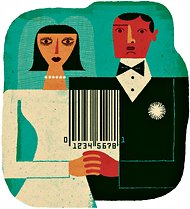 They appear, for example, to focus more critically on the earnings potential of prospective mates. Because house size is often assumed to be a reliable signal of wealth, a family can enhance its son’s marriage prospects by spending a larger fraction of its income on housing.

For example, when Shang-Jin Wei, an economist at Columbia University, and Xiaobo Zhang of the International Food Policy Research Institute examined the size distribution of Chinese homes, they found that families with sons built houses that were significantly larger than those built by families with daughters, even after controlling for family income and other factors. They also generally found that the higher a city’s male-to-female ratio, the bigger the average house size of families that have sons.

Mr. Wei reports that many families with sons have begun to add a phantom third story to their homes, one that looks normal from the outside but whose interior space remains completely unfinished.

“Marriage brokers are familiar with the tactic,” he reports, “yet many refuse to schedule meetings with a family’s son unless the family house has three stories.”