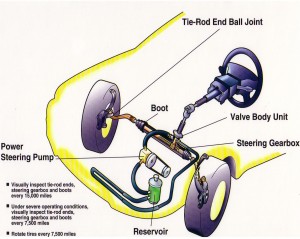 I was replacing the power steering fluid in my car when I stumbled upon some exponential decay math.  First, some background:  There is no drain plug on a power steering system.  You need to siphon out fluid from the reservoir and replace it with new fluid.  This new fluid then mixes into the rest of the system to create a slightly cleaner mixture.  This idea is that if you repeat this a few times, you’ll replace most of the old fluid with new fluid.

So, as you can see, there exists some sort of formula that can determine exactly how many times you need to extract and replace to reach X% replacement.

My car’s entire power steering system holds about 1 liter, and the reservoir itself holds .4 liters of that. So, 40% of the steering fluid is replaced each time I drain and refill the reservoir, and 60% of the old fluid remains elsewhere in the system.  I can do this repeatedly, each time replacing 40% of the “mixed” fluid with brand new fluid.

(initial proportion that is dirty)

How many times do I need to empty and fill the reservoir to get to 80% clean?
Just set

and solve for n:

With a reservoir that holds 40% of capacity, I need to empty and replace it about 3 times to get 80% of the old fluid replaced.

You can also use the formula to figure out what percentage of the system contains old vs. new fluid, based on the number of flushes you’ve done.  For this, you just plug in n and calculate