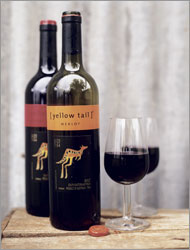 The Wallaby That Roared Across the Wine Industry

Prima facie, it looks like exponential growth.  But, in the real world, nothing ever grows exponentially in perpetuity (except college tuition, it seems)   I looked up sales figures for other years online.  Let’s plot these numbers in a spreadsheet, and see how they look.  As you can see the growth started to flatten out after a few years.

Do you notice the negative leading coefficient of the x2 term? Remember how this makes the parabola “frown”?  Well, this “inverted parabola” shape clearly reflects the flattening of the sales growth.